You shall not pass... 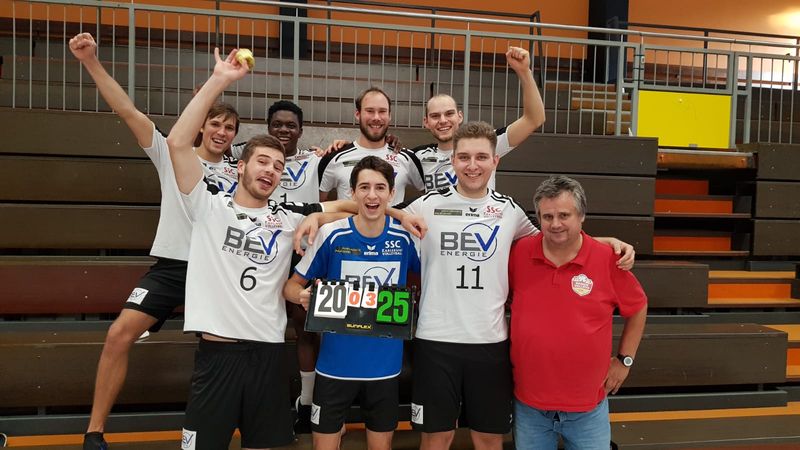 The first matchday of the new year brought H5 the encounters with the teams of PSK and Kammachi Bühl. We looked forward to the matches as the recent years’ bezirksliga has been quite fair and rewarding. Who plays poorly loses, and good play is enough to win, it is as simple as that. Clearly, the idea had been to play well on this Saturday in the lovely Wildparkhalle. However, speaking about rewarding, the first match against PSK could not have possibly started worse. The lack of concentration and confidence combined to yield a quick loss of the first game. As it often happens with us, the match turned around completely after the first interval, and the second and third games were completely different. While these games were in balance from the beginning (until 21:21 in the second and 18:16 in the third), we secured them by concentrated performance at their respective conclusions. Then, however, two sequences on serve by the PSK were enough for the fourth game to slip out of our reach, so the match had to conclude with a decider. We started it off with a play that was as good as it gets, and the resistance from the opposition only came too late. All in all, two hours of enjoyable sport with a happy ending. A great thing about the second match of the day was that it actually took place. Since Kammachi Bühl sometimes struggle to assemble a complete team for their matchdays, we were delighted that they succeeded this time. Well done, fellows, and please let us do it the next time, too. The match itself could not have possibly started better for us, and a win in the first game was secured soon. Then, however, Kammachi refused to give up, their improved play opened a huge margin in score, and the game was decided well before 25. The games three and four were a bit of a roller coaster ride, however the short bench and the higher median age of the Kammachi guys seemed to take their toll, so that we finally won both with little drama in the end. This Saturday afternoon brought five out of six points to the account of H5, and yet we see clearly what we need to do better in matches to come. While the coverage on both sides of the ball worked for the most part, there is ample room for improvement in the interplay of the setter and the opposite hitter. More generally, it is necessary to harvest much more from free ball chances that the opposition gives. Not least, the attacking unit was overloaded in the rotation with setter in zone IV, which often led to sizable point deficits, much the same as in previous matches. Therefore, we require to develop mechanisms to relieve the pressure in these situations. There is good news, too, and that is how well our youth players have been integrating into the team. Benny was favored by the PSK guys over all of the match as their service target. It had been increasingly ridiculous how patiently the guys from PSK waited for his reception to crack. That never happened, rather, he added to the scoreline his fair share of attack points. Then there is Tonio, who although too self-critical, did better on the opposite hitter position than he thought himself. On the other hand, David is within full rights to be disappointed as he was accidentally knocked out during the warm-up before the second match and, sadly, did not clear the concussion protocol. Our next opportunity for competition play is coming soon, namely this Sunday at FT Forchheim. SSC H5 – Post Südstadt Karlsruhe 3:2 (-12, 23, 17, -20, 11) SSC H5 – Kammachi Bühl 3:1 (16, -19, 19, 17) H5: Benny, Chris, David, Felix, Jens, Jonathan, Marian, Ralph, Tonio, Tomáš, and coach Anka. 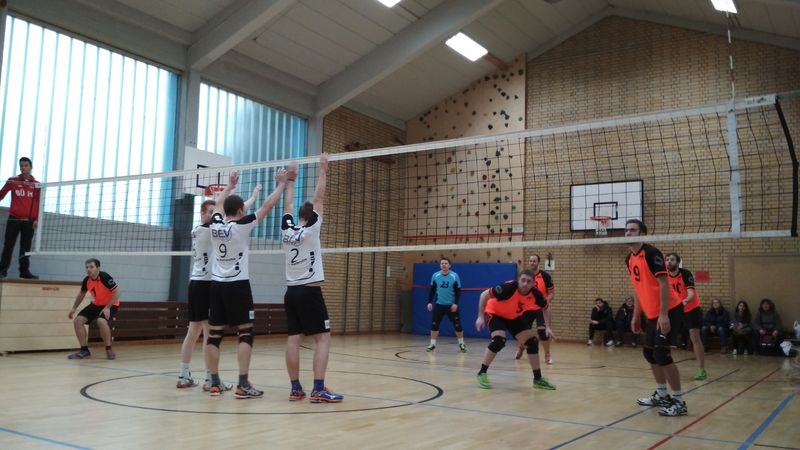 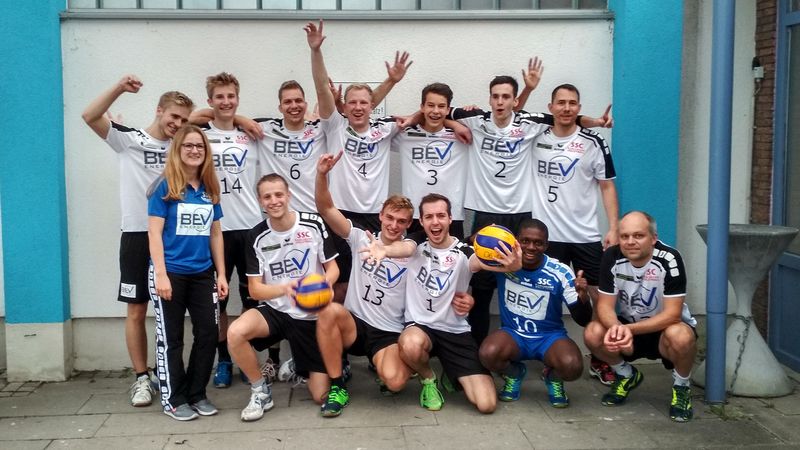 The first matchday of March brought the team of H5 an invitation for a short stadtbahn trip to the neighboring town of Durmersheim. Given the positive recent developments in all aspects of their play, this was a welcome opportunity to make up for the 1:3 loss from the home fixture. In addition, those who analyzed the current standings in the bezirksliga division pointed out that a full point gain from this match would guarantee H5 staying away from the relegation spots at the conclusion of the season.

There were also bad news prior to the match, as an injury during the practice took out one player earlier that week. In addition, H5 did not manage to obtain a license for a promising new libero, making him ineligible to play. That made the number of available players drop to eight. The only reasonable option was not to assign a libero and make use of the rather solid reception skills of both of the middle blockers instead.

Notwithstanding, the match could not start better for H5. Their focused performance earned them an early lead of 4:0 and 9:2, which was maintained throughout the game. The reception was fairly reliable, and the attack department harmonized with the setter. The service did quite some damage, while both the block and the back-court defense stood well and remained attentive. The home side failed to keep up, and the game was over soon (25:16).

But it was not all clear sailing. Right from the beginning of the second game, all playing actions deteriorated in quality suddenly. When a player made an error, there was no second man to put in an extra effort to compensate. The Durmersheim side were happy to take any chances H5 would give, which they made very clear by knocking out a back-court defense player in a strong attack action. The game went slowly but steadily out of reach of H5 and ended nowhere near to close (15:25). In a retrospective, however, it is interesting that the unlucky phases of the match concentrated in this second game. Thus, while the game itself was lost by a large margin, chances were good that this would remain without consequences for the outcome of the whole match.

Games three and four, namely, were a story much more like the first game. Back was the concentration in all individual playing actions as was the good communication within the team. Both of the games were tight initially with all of the solid play by H5 counter-acted by the home side. H5 were not even a little impressed, and at some point, they started accumulating points that would remain without response from Durmersheim. So, game 3 was level until 16:16 to take an end at 25:18, and the grand finale that started at 9:10 in game 4 came to a finish at 25:14. The match concluded with one of many sequences on own service, and the first match point was converted.

What was particularly striking is the constant pressure that all of H5’s servers built up upon the Durmersheim reception while keeping the error rate low. How crucial that was became obvious in the following match, which featured the current division leader from Öschelbronn. Although their performance was as cohesive as usual, their not quite powerful service made it possible for the Durmersheim side to improve their reception, set more accurately and, consequently, put into effect the best of their undisputed attack skills.

Not less important is how the H5 side acts whenever no direct point is scored on service but the opposition cannot attack optimally. Then, the defensive complex works patiently and reliably to increase the pressure and, finally, force an error. On a related note, all of the team have equivocally accepted that no rally is over before the ball really touches the floor, which keeps even seemingly lost rallies going and upsets the opposition greatly. Such a mature attitude and mental strength are certainly the most delightful findings about today’s H5, considering the young age of most of the team. The future can be nothing but bright. 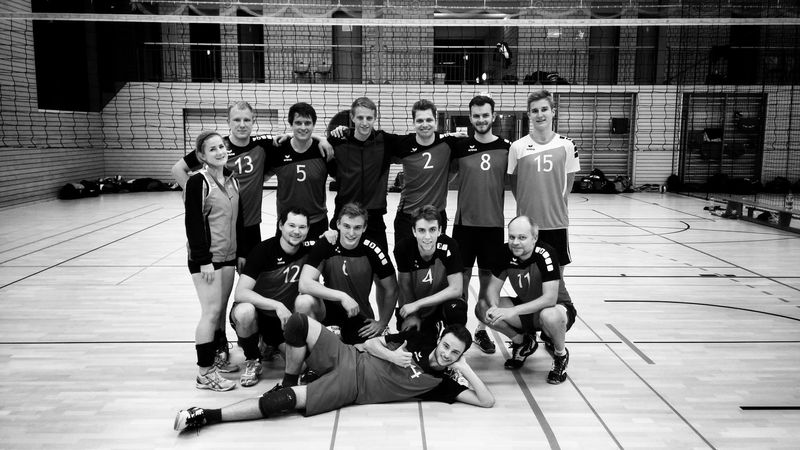